Survived my first week of teaching! Or perhaps I should say the students survived the first week of my teaching. It occurred to me at one point during the week how impressive it is for these students to be both learning English and learning in English! Somehow, I hadn’t really considered that before. I can’t imagine trying to learn science in a second language at 10 or 11 years old!

There have been some challenges but I have one student who gives me a hug every time she sees me, one whose primary goal is to make her teachers like her, and another who wants to be a microbiologist, studying 5thgrade science as if her future depended on it. I have a boy who giggles and laughs enough to exasperate any teacher but then proclaims he is too happy to stop and who can be frustrated with that? Another student helps a friend who is a bit further behind in English to understand the material we are covering.

Identidad Nacional
Over the weekend I toured Teatro Nacional and Museo Nacional. I actually took my camera along hoping to get some pictures only to discover the battery was still nestled in its charging station at home. Phone photos certainly don’t do justice to the theater! I have been interested in visiting the National Theater for a while and have been scoping out the schedule for a couple of months. It turns out Dracula is playing during the month of March and after my tour of the theater I definitely want to try and see it! The theater is beautiful and the tour guide shares a lot of interesting details you wouldn’t get just by attending a show. For example, the floor raises to form a ballroom floor! There is a large screw in the basement (think carousel or sugar cane press) that must be turned 191 times to lift the floor! The next time the floor will be raised will be for the presidential inauguration in May. It was raised for the last presidential inauguration and once for President Obama. Not only does the floor raise but the chandelier lowers for ballroom use as well. Much of the material for the theater was imported including marble and other details. The chandelier, however, was “hecho en Costa Rica”. The theater prices are the same for everyone, including extranjeros. When the “new” theater was built the goal was to be inclusive of all people, not just the elite, and the tradition continues. Pictured is the president's seat, which is in the middle of the theater, visible to all. 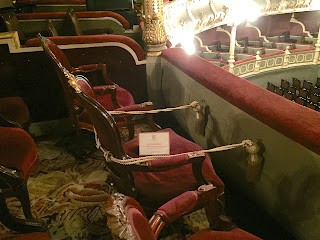 I have actually seen a lot of poor reviews for the national museum but I thought it was very nice! Some reviews stated the jade museum was actually a better museum but having now been to both I disagree. The extranjero price for the National Museum is cheaper and there is far more to see, including a section on the pre-Columbian period which has similar items to the Jade Museum, only fewer in number. The tour begins with a walk through a lovely butterfly atrium and then takes you into the dungeons of the former barracks. From there you can walk up to a couple of different exhibits. One is a walk-through timeline of Costa Rica’s history, another is the Pre-Colombian exhibit. The last is, I believe, an area with rotating exhibits but at this moment it is a very well done and informative exhibit on Cocos Island. I have many pictures from the museum but for amusement's sake: 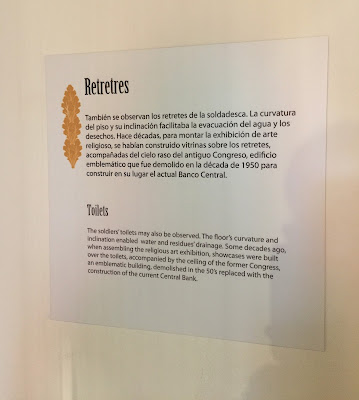 I will post more pictures from these ventures on Friday! And hopefully I can get some better picture when I return to see Dracula.

Otra Cosas
-       I was asking the ticket sales attendant at Teatro Nacional about the process for buying tickets for plays. He informed the plays were in Spanish but that I could go see the symphony.
-       Some ladies in the bus line took offense at me getting back in the front of the line, where I had been waiting for FORTY minutes because the bus was late. I had taken a few seconds to check the bus behind as one of my fellow long-waiting companions had departed in that direction. I may not speak Spanish well but context helps make the most of understanding the words I know. Dirty looks and gestures, for example. I considered using aforementioned limited Spanish to answer their question of where I had come from but I decided to… let it gggooooo, let it gggoooooo. #personalgrowth

Sorry for the length on this one! Until next time… 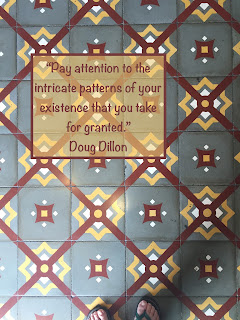 Posted by Caridad at 6:37 PM No comments:

A light week on the pictures. I am starting to forget which week things happened when, my note-taking skills have lapsed. Anyhow, a few shots from what I think was the third week. First, the poster I made for our science lab. The school has a verse for the year and each teacher puts it up in their classroom. I made one for the science lab and a coworker made one for the main science classroom. 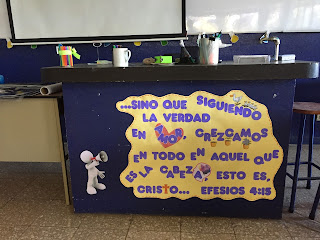 As you can see there was a worker's strike at a local shop. Seemed to be resolved in a couple of days. 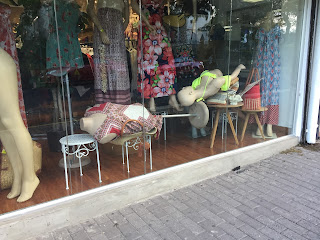 Feria haul. Got all of this - pineapple, papaya, zapotec, lechuga, platanos, manzanas de aqua, cangrejos, zanahorias, brócoli, papas... for about $14.00, or 8,000 colones. 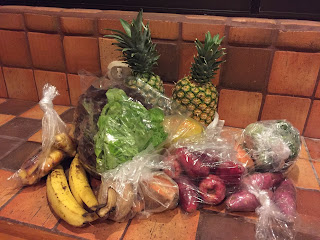 I am not sure I made enough rice... You decide. 700 mL Lizano bottle for comparison. 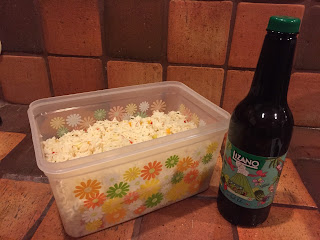 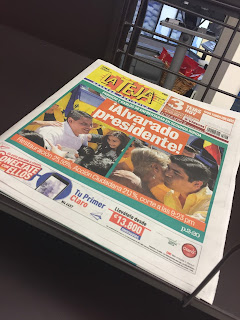 And that's about it for this week. Trabajando and all. Semana 4 has been a little slow as well but I am planning some coffee and museum adventures for the weekend so stay tuned.
Posted by Caridad at 8:19 PM No comments:

Murph vs. The Pura Vida

It would seem Murph isn’t troubled by political borders. Maybe if we built a wall.... but I digress. He has been showing his can-go-wrong face around here a lot. There was the water, as you’ve read by now. There was the snapped clothesline that dumped my clean clothes on the floor... to which I laughed and headed to work. #takethatmurphy #doesanyoneknowhowtoknot 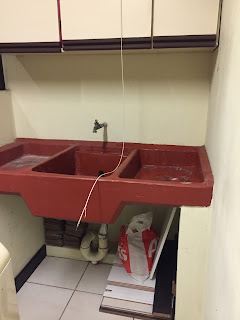 But this weekend it got serious. First, the vase holding the lovely flowers I bought myself were taken out by a gust of wind, pouring water into my storage containers below... 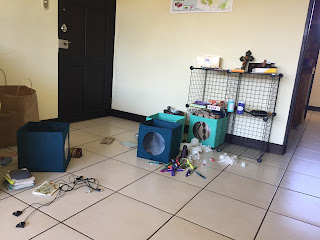 Then, a case of dyslexia set in and I recharged someone else’s phone. (Recharged = added data). This was followed by a thrown breaker. I'm no stranger to thrown breakers but I couldn't find a breaker to throw to save my life. I moved the rice cooker to the bedroom and was going to let the Pura Vida ride that one out but then I realized the fridge was off. Bring in the hero next door. He’s going to need more chocolate. He pointed out that the breaker box was hiding behind the mirror I’ve been contemplating tossing. #byefelicia 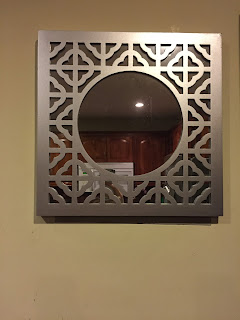 That was Sunday… fast forward to Monday afternoon. I realize my new "English" computer - the one I got because I asked to not have to operate in Spanish - doesn’t have Microsoft Powerpoint.

That’s it, Murph, you win! Done. Meltdown. Panic. To quote the Chepe sign vandal “Pura Malavida”.  Luckily the More or Less has a binder for that. #lasttimeiaskforenglish #untiltomorrow 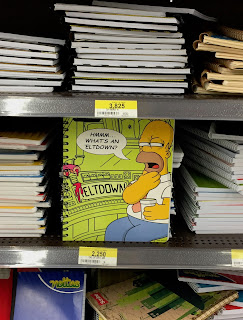 Sunday was Election Day aquí en Costa Rica. It’s kind of a big deal. There is only one day of voting and it’s something of a celebration. I feel like in the US we are so weary of politics by the time the day arrives that for most of us Election Day isn’t much of a celebration, other than to celebrate it being mercifully brought to an end, whichever terrible candidate wins. There I go digressing again! On Saturday before the elections there began to be processionals (flag adorned vehicles honking their horns) down the calle outside my apartment. When I ubered to church in the evening I asked my driver about the bandera waving activity to which he replied “mucha propaganda”. He could be my tico libertarian soulmate. Side note: horn honking seems to be a national pastime in all Latin American countries I have visited.

About that internet saga. Let’s all pause a moment to pray that Charity gets some internet in her casa.

An unnamed internet provider was to arrive Saturday after a benevolent coworker helped me arrange things. At around 3 in the afternoon I spoke with said provider and they were to arrive “antes” 6 in the evening. Cool! I’ll make my daily More or Less run before they arrive. So there I was... leisurely wondering where peanut butter might be and exactly how precio it is when it hits me. Antes = before. Not. After. I know this. *sigh* Speed home on foot trying not to break the eggs... arriving shortly before I get the much-anticipated call to FINALLY have internet. If only.  Guy tours my house for about a minute. Well, two. He desperately needed water which I provided and he drank. So we will say two minutes. Says he needs to go outside to look at something and that was the last I saw of him. He texts me to inform me they can’t provide service here. On top of all of that his phone didn’t work, and he was in no way identified as being an employee of the company. All very strange and despite the ongoing data drought it seems for the best that he vanished.

Otra Cosas:
- I discovered Maria Bonita's Mexican which is my new favorite place. Freddy the Tico met Maria the Mexican online and brought her to Costa Rica where she is now serving up delicious comida. Freddy speaks English and adoringly places Maria's fine cooking. Also offers a pleasant view of the town and center and reliable wifi.

This probably has seemed a negative post but I like to think of it as the slap stick comedy version of my CR life. If I told you the view of the mountains blows me away every day and that people are by and large helpful and friendly it wouldn't be a very interesting read, now would it? Until next time... 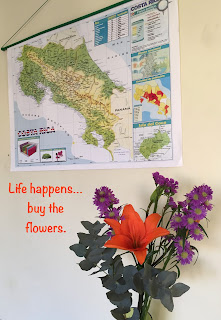 Posted by Caridad at 6:36 PM No comments:

I went to the Museo de Jade in Chepe. I thought it was a little overpriced for extranjeros, especially considering one exhibit was closed, but it was interesting and well planned. Here are a few pictures. 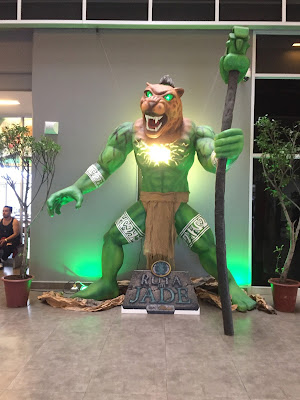 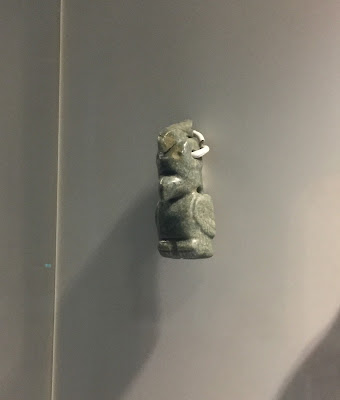 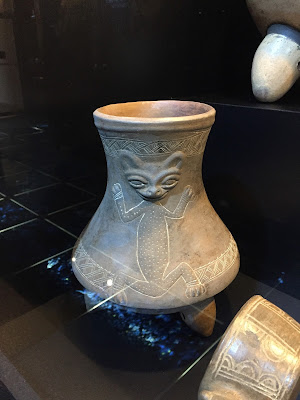 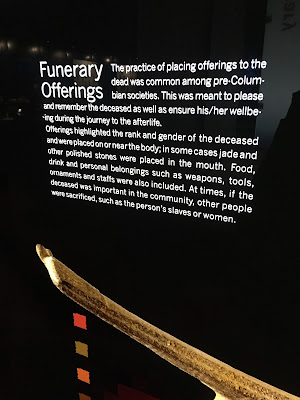 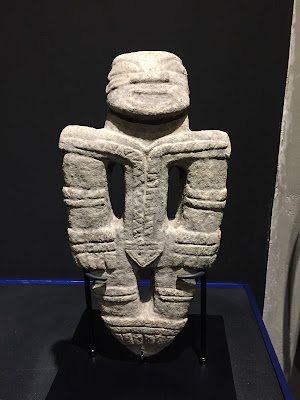 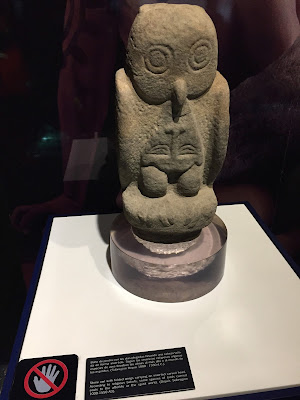 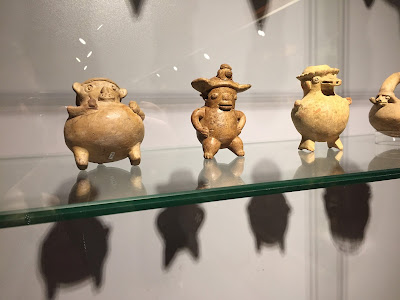 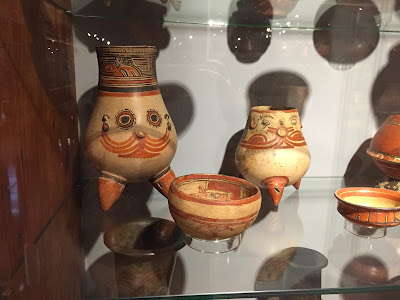 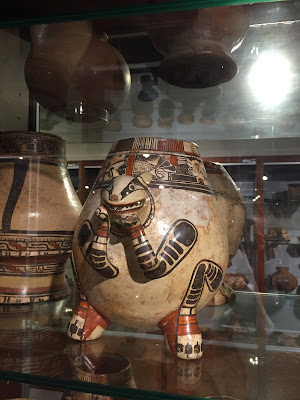 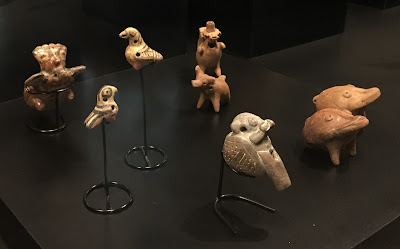 Someone was having a bad day... I've had a few of those. 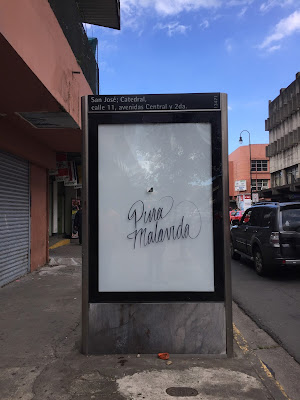 Keep your floors clean for those special moments. Muy importante. 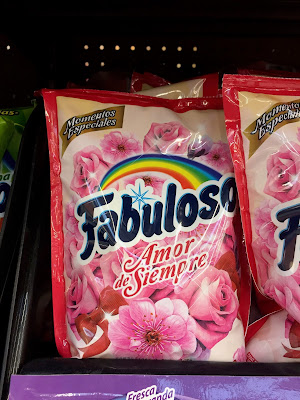 For the record I love Fabuloso, ever since my tenure in México del norte (South Texas).

Something interesting, to me, that I have noticed here is the pairing of seemingly random products. This one is actually boxed together but sometimes they are just taped together in their separate boxes. Yes, I will buy this skillet because I also need an iron at the same moment! The skillet/electric chopper combo made more sense and was tempting but I remember I decluttered the electric chopper I never used... 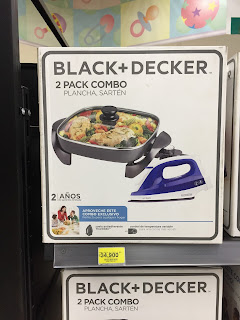 "Some language barriers are bad
They can really make you mad
And sometimes make you swear and curse"
Or sometimes you wind up with three scoops of ice cream in a giant waffle cone instead of the single scoop of ice cream you were attempting to ask for. I think this is the Pura Vida. 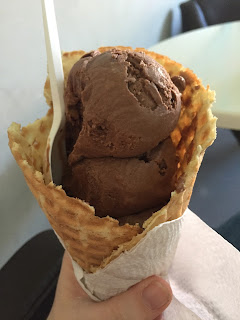